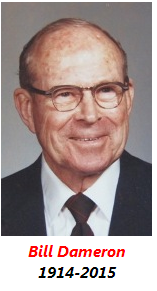 He took a turn for the worse right after Christmas. Pneumonia, but mainly old age. Came home from the hospital Wednesday afternoon to Hospice at the place they live and passed away this afternoon (Friday). Relatively quick and painless. His body was just worn out. So glad you saw him last year.

BILL DAMERON – Flown West
Bill Dameron began his aviation career many years ago with the Bluefoot Flying Service. He flew briefly for United Airlines then signed on with Braniff in October of 1940 and stayed until 1947. Bill needed to be a little closer to home, so he left Braniff and became a pilot for Sears Roebuck where he stayed until retirement in 1975. Bill lived with his wife, Jerry, in a retirement community in West Columbia, SC. Jerry was a Braniff Hostess hired in 1939.